You are here: Home / Prague / Basilica of St. George, Prague 1

Don’t let the ornate Baroque facade fool you. The Basilica of St. George in Prague is the oldest church in Prague Castle and one of the best-preserved Romanesque buildings in the city. It was founded in 920, destroyed by fire in 1142 and rebuilt in its present form.

Along with the tomb of its founder, Vratislaus I of Bohemia, the Basilica holds the grave of St. Ludmila. You might remember her story from the statue on Charles Bridge.

Tap on a Photo to … END_OF_DOCUMENT_TOKEN_TO_BE_REPLACED 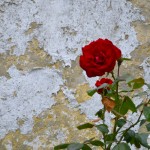