Saint Ludmila was the grandmother and guardian of St. Wenceslas, aka Good King Wenceslas.

Legend has it she was strangled in chapel with her own veil (note her left hand). Wenceslas’s mother, Drahomira, didn’t approve of Christian policies or mother-in-laws. That might account for Ludmila being the patron saint of Bohemia, converts, Czech Republic, duchesses, problems with in-laws and widows.

Her grandson (at her right knee) didn’t fair much better. He was assassinated by his brother, Boleslav the Cruel.

Tap on a Photo to … END_OF_DOCUMENT_TOKEN_TO_BE_REPLACED 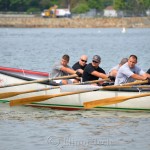