Marionettes popped up in Prague around the time of the Thirty Years’ War (the one that began with an unfortunate defenestration).

Popped up and never left. If you walk through the streets of the city, you will be leered at by a grotesque series of monks, witches, doctors and peasants. Every tourist and toy shop offers you a chance to purchase your very own nightmare.

But if you want to see these characters in their true habitat, visit the National Marionette Theatre in Old Town. There you’ll be treated to a performance of Don Giovanni unlike any other.

You’ll first meet the (human) ticket collector, a man who might have had his strings clipped off yesterday. It’s not only the pointed chin and a bald head that does it, but the owlish eyes magnified by round glasses and impossibly arched eyebrows.

Then you’ll enter the theatre, where the stage is small and the smell distinctly subterranean. Into the orchestra pit marches an anemic, bewigged figure who bears a remarkable resemblance to – no, wait, is – Wolfgang Amadeus Mozart.

And it’s all inspired chaos from there.

There is smoke, rain, mold (but no fire). Water, limbs and scores are hurled with abandon. Giant hands and velvet cuffs waltz above the scenery. Mozart gets boozed. Marionettes sing and sing and sing until they won’t shut up. A hulking figure with a broom appears to shoo them away.

And in the end, Don Giovanni goes off to hell and the performers go back in their boxes.

If you have time, you can linger in the lobby to read more about the history and traditions. Prague’s puppeteers were acutely aware of the outside world, and their performances often echoed developments in art such as surrealism, the Bauhaus movement and Cubism, as well as being a platform for protest and national pride.

Their sly satires often went unnoticed by the ruling regimes (Habsburg, Nazis, Soviets). They were puppets, for goodness sake.

But they didn’t get away scot free. During World War II, a visitor to Josef Skupa’s show noticed that a puppet on stage bore a remarkable resemblance to a mustachioed figure in Berlin. What’s more, the Hitler stand-in did not exactly have much in his wooden head.

The puppeteer – and the puppets – were arrested.

The sign in this photo is for UNIMA (Union Internationale de la Marionette), aka the World Puppetry Organization. UNIMA was founded in Prague in 1929; Jim Henson established the U.S. arm in 1966.

Each figure in this sign represents a puppet of national character. I believe Pierrot (France) is second from the left, Punch (Britain) is third.

In the spring of 1968, Czechs had a brief taste of freedom. Liberal reforms had loosened the grip of Communism. Change was in the air.

It didn’t last. Soviet tanks rolled across the border in August, crushing any hint of rebellion.

Except in the hearts of citizens like Jan Palach, a student of history and political economy at Charles University. On January 16, 1969, Palach walked into Wenceslas Square and set himself on fire. He died soon after.

One month later, another student, Jan Zajíc, did the same.

Palach became a symbol of Czech resistance. Protests on the 20th anniversary of his death (1989) helped kickstart the fall of Communism.

This bronze cross marks the place where Palach fell. On the day I visited, no one was paying any attention to it.

When he wasn’t standing up to the Communist regime, ordering the redesign of military uniforms or ruling the Czech Republic, Václav Havel wrote plays. Good ones.

This is a poster for The Garden Party.

The story of the nosy church official…

Rumor has it that the painter of the chapel fresco (I’ve seen it ascribed to Karel Skréta, Johann Kracker and a variety of other names) liked to work in privacy. One day he spotted a Jesuit church official peeking in on his progress. As punishment, he included the spy in his painting. Espionage, it seems, has been with St. Nicholas Church since the beginning.

Tap on a Photo to … END_OF_DOCUMENT_TOKEN_TO_BE_REPLACED 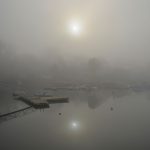 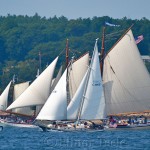