This 10,000 sq. meter giant is a Budapest institution, the largest indoor market in the city and one of the most popular tourist highlights in English guidebooks. Avoid Saturday mornings.

In June, the bottom floor is filled to the brim with fresh strawberries, white carrots, garlands of salami, dead animal parts and aisles and aisles of paprika. The national spice arrived in Buda in the early 16th century, a culinary gift from Ottoman invaders. It’s not as prevalent as it once was, but some kitchen tables still sport three shakers: salt, pepper and paprika.

Adventurous eaters can head for the back, where a helpful display explains which mushrooms will cause convulsions, frothing, rictus and, just possibly, death.

Otherwise known as the land of schlock.

Tap on a Photo to … END_OF_DOCUMENT_TOKEN_TO_BE_REPLACED 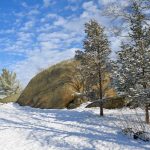