The Stephansdom (“St. Stephen’s Cathedral”) is Vienna’s beating heart. Built on the site of a Roman cemetery, this Gothic & Romanesque behemoth has lived through two major fires, a Turkish invasion, and endless expansions. First consecrated in A.D. 1147, it is the oldest church in Vienna, and a treasure trove of history.

For this is where the bodies, hearts, or viscera of 72 Habsburg family members lie. This is where Mozart had his wedding, Vivaldi had his funeral, and Prince Eugene of Savoy has his tomb. Every famous Viennese resident has gazed at its silhouette, including Beethoven. When he glimpsed startled birds fly from bell tower but heard no bells, he realized he was truly deaf.

If you can make your way through the gauntlet of pseudo-Mozarts hawking musical entertainments, you can spend hours exploring the Stephansdom. The main entrance – the Riesentor (“Giant’s Door”) – is the one depicted in this photo. In A.D. 1443, when foundations for the stumpy north tower were being excavated, a mastodon’s thighbone was unearthed. This magical leg of a giant was promptly mounted over the door. Alas, it’s no longer there.

For more on the cathedral’s wonders, see:

Tap on a Photo to … END_OF_DOCUMENT_TOKEN_TO_BE_REPLACED 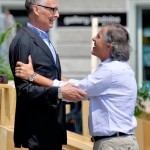 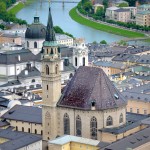 Salzburg’s Franciscan Church is a lovely muddle of Romanesque, Gothic, Baroque and Neo-Gothic. Like the Dom, it owes its origins to the stalwart work of St. Virgil. Unlike the Dom, it is known as the church of the middle class – the wealthy burghers of Salzburg hired the architect Hans von Burghausen to create the […] 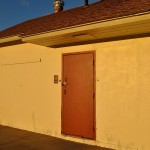