St. Vitus is the patron saint of actors, entertainers, dancers, epileptics and Bohemia. Troubled by lightning, dog bites or oversleeping? Spare a prayer for St. Vitus.

After his martyrdom in the 4th century, his fame (and bones) spread rapidly through Europe. In A.D. 925, King Henry I of Germany visited Wenceslaus, Duke of Bohemia, and presented him with the bones of one hand of St. Vitus. The Duke built a Romanesque rotunda in the saint’s honor, subsequently replaced by St. Vitus Cathedral.

Thanks to the dancing moves of medieval folk during his feast day, the saint has also lent his name to St. Vitus Dance, the common term for the neurological disorder Sydenham’s chorea. Sufferers typically experience uncontrollable jerky movements in their face, hands and feet.

Tap on a Photo to … END_OF_DOCUMENT_TOKEN_TO_BE_REPLACED

The patron saint of travelers is carrying Christ on his shoulder. Sculptor: Emanuel Max (1857) Commissioned by Václav Wanek, the portreeve of Prague. 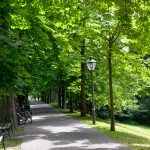 Graz’s city park is full of little old ladies and students smoking exotic substances. If you’ve had it up to your back-teeth with sightseeing, it’s a nice place to hide. Unless, of course, you’re wanted by the police.