Born in the late 14th century, Jan Hus wasn’t far behind John Wycliffe in his efforts to reform the Catholic Church.

As an impoverished young man, he made his way to Prague, paying for his university education by singing and serving in church. He earned a B.A., an M.A., became a priest, even served as rector of the university – a promising start.

But the winds of change were blowing from the University of Oxford and Hus was one of the first to feel the effects. He began to rail against the inequities of the church:

“One pays for confession, for mass, for the sacrament, for indulgences, for churching a woman, for a blessing, for burials, for funeral services and prayers. The very last penny which an old woman has hidden in her bundle for fear of thieves or robbery will not be saved. The villainous priest will grab it.” (Macek, 16)

Hus’s attacks on indulgences, crusades and papal graft were popular with the Czechs; not so much with the Pope. He was burnt at the stake for heresy on July 6, 1415.

It was not a popular decision in Bohemia. 15 years of war followed – the Hussite Wars – and centuries of resentment between Catholic and Protestant.

Tap on a Photo to … END_OF_DOCUMENT_TOKEN_TO_BE_REPLACED 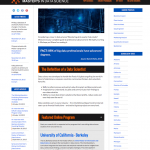 Data science is exploding in popularity – but where to go for advice? For this educational website, I completed the initial blog posts & web copy, including sections on Career Profiles, Technologies, and Industry Uses. My blog post on The Ultimate STEM Guide for Kids: 239 Cool Sites About Science, Technology, Engineering and Math continues […]